The large number of projects initiated in recent years in the field of "Citizen Science" and "Crowd Science" (CS) shows it: the cooperation of scientists and citizens in open and collaborative research projects is becoming increasingly important and is finding more and more acceptance in various scientific fields. One successful example analysed in this recent publication is the Curieuze Neuzen project in Antwerp. More than 2,000 citizen scientists collected data on air quality and participated in the data analysis, interpretation and dissemination of the results. The data was used to better explain the variations of CO2-concentrations in urban areas and to optimise existing computer models. At the same time, the project results should stimulate a political debate and promote stricter regulations in the field of transport and air pollution. The project has also been shown to raise awareness of environmental issues among the citizen scientists, and some participants also started to think about personal actions to improve air quality during the project.

The promise of CS is thus manifold. On the one hand, it aims to promote scientific productivity and the impact of scientific research (by bringing new knowledge and additional work contributions into research projects), and on the other hand, it aims to ensure a broader involvement of the public in science, thereby achieving knowledge transfer.

The terms "crowd science" and "citizen science" are often used in practice as synonyms. However, if one takes a look at the relevant specialist literature, it becomes clear that citizen and crowd science are each researched by different disciplines, without any significant exchange taking place between them.  A stronger integration of these research areas could enrich the knowledge gained on crowd and citizen science. On closer inspection, there are indeed many similarities between the two fields, for example, both terms indicate the cooperation of a group of people beyond the usual boundaries of an organisation to pursue scientific and non-scientific goals together. Within the crowd and citizen science literature, there are numerous categorisations (so-called "taxonomies") - but the dimensions they contain are often very different and detached from each other. 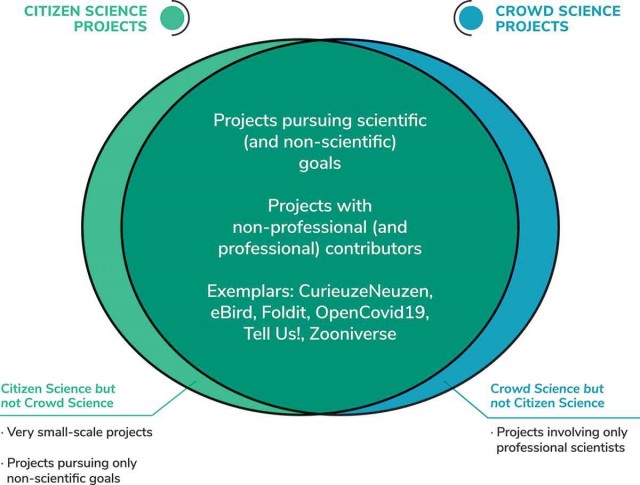 The publication mentioned above also proposes a categorisation of crowd and citizen science projects that is applicable to a wide range of scientific fields. This categorisation also offers space for the role of machines and algorithms, which increasingly replace professional and citizen scientists or provide complementary services. In the categorisation, the activities (e.g., collecting air samples), the knowledge (e.g., general knowledge vs. specialised knowledge), the resources (e.g., a computer with internet access) and the decisions (e.g., about a process or an object) of the groups involved are found on one axis, and the phases of the research process (from the development of the research question to the dissemination of the results) are found on the other axis. This categorisation allows for comprehensive profiles of CS projects and the contributions of the groups involved.

Finally, the article outlines a research agenda that addresses key organisational challenges of CS. Such an agenda can improve the understanding of crowd and citizen science, provide practical recommendations for project design, and contribute to the broader organisational literature.

By accepting you will be accessing a service provided by a third-party external to https://www.citizen-science.at/